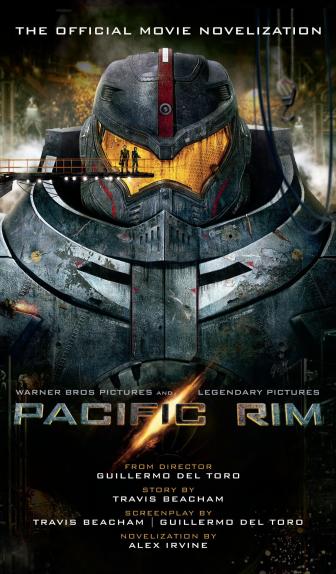 This is an interesting review for me. I just caught an opening night screening of the film last week to get my review for Best-Horror-Movies.com up (you can check that out right here, if you’re interested), so I feel as though I’m on the cusp of creating a carbon copy of an article. Not a particularly great feeling.

Alex Irvine’s novelization tells the same story that unfolds on screen. Giant monsters known as Kaiju rise to the ocean’s surface after tectonic plates have shifted and created a strange opening on the sea floor. These beasts are as large as skyscrapers, and they’re destructive as all hell. In order to combat such a menacing force mankind creates Jaegers, massive robots which can be operated by human beings. What follows is a battle for earth, and it’s a little goofy.

The live action film was – admittedly – a pretty significant letdown. Director Guillermo del Toro has made a name for himself creating wonderfully imaginative pictures with mesmerizing visuals and stellar onscreen performances. Well, Pacific Rim had a few great visuals (sadly even the explosive fight scenes become acts of redundancy after a few exchanges… which are each exactly the same as the battle prior), but that’s really about it. This novelization is similar in the sense that it’s pretty decent as a whole, and there are some stimulating moments, but ultimately the story just falls a little flat and feels repetitive by the time readers arrive on page 336.

Irvine is serviceable in his transfer from script to novel, but he’s not remarkable in any way shape or form. The moments in which Irvine runs through the technical mumbo jumbo are rewarding, but when the intricacies are cast away, and it becomes time to focus on the smaller things, like human beings and their issues, Irvine falls short of the mark. It’s unfortunate, because there was a fantastic opportunity here to improve upon the characters introduced in the picture. Just doesn’t happen.

Is Pacific Rim worthy of a read? Sure. It’s fun in spots, and moves along quite swiftly. However, it’s not a remarkable piece of work by any stretch of the imagination. It’s not terrible, but it’s not amazing; like the film this one just slides into that sketchy zone of mediocrity.

You can give it a try by ordering right here.