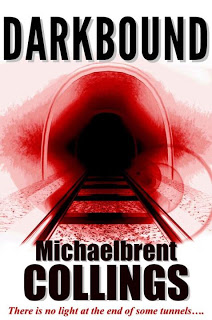 Everyone has a deep fear of death, not only the aspect of death itself, but how it will happen. Will we go in our sleep? Or meet some horrible fate? Everyone also has a personal fear of the worst way that they could possibly die; murder, eaten by a shark, drowned, all these will seem incredibly weak in comparison to the futures of some of the passengers taking a journey that is ‘Darkbound’ and tap into and concoct a new phobia of how you could meet your demise. Michealbrent Collings takes you on an ultimate journey of thrills, twists, ghouls and shocking revelations.

‘Darkbound’ explores the New York subway system like never before, and it’s safe to say that after reading this book you will think twice about taking the subway. And if you do, you will no doubt be observing your surroundings a lot more judiciously.

Jim, an everyday New-Yorker, hops onto a subway train after a very uncomfortable encounter whilst waiting at the platform, and begins his all too familiar and slightly mundane journey. But, oblivious to Jim, this journey will be anything but monotonous. When bizarre incidents occur that shake him to the core, it soon becomes all too obvious that this journey will not only be one of an ever-changing nature, but one that he and his fellow travellers may not survive.

Instantly, this novel piques your interest with the unusual combination of characters. All have a contrast of backgrounds in wealth and social status, culture and heritage, intellect, and temperaments, all of which adds tension to the plot, especially when the characters begin to clash with each other. Just as this group tension and conflict escalates, the truth of what they should really be fighting against comes into play.

The characters at first are presented as nothing more than stereotypes, behaving and reacting in a way that we have been mediated to believe so. But as we delve deeper into the story unlikely character collaborations commence as similarities become apparent, and their new found friendships are put to the ultimate test when they determine just how far they are willing to go to save this new acquaintance.

They each have their own personal motivation, which is fantastic in terms of characterizing each of them. But Jim’s motivation, I felt, helped make his character, and the story, more alluring. There is also, as in many successful novels, a huge element of voyeurism. We receive a voyeuristic pleasure from how a group of strangers interact with each other, and also how they cope with their own fears and insecurities. Eventually unleashing to us small titbits, exposing that the characters are not who they appear to be.

A particular strong point of this novel is its mixture of sub-genres in horror when it comes to the threats they face, from human homicide, to the undead, and the extraordinary other-worldly dangers. Leaving you on your toes when each new horror begins to unravel you become very anxious to discover what it could possibly be.

The way in which the horror ascends as they are forced to move from carriage to carriage working their way down the subway train of terror; suits the narrative perfectly with each distinct incarnation of evil increasing. Which works hand in hand with the narrative also building, concluding in an incomprehensible climax that will satisfy the deepest craving for your horror addiction.

The general feel of the book is unlike any I have read before, it truly constructs a sense of alienation generating not only a feeling of fright but an odd consciousness. As you may feel when realising there is no end to anything, the universe, space, or time, something that baffles you and brings into being something similar to an existential crisis. This is done by excellent writing, and thought provoking issues dealt with in the book.

A further component is Jim’s observations being both hugely compelling, but additionally his profession allows him to make more educated observations, analysing and predicting human behaviour.  As insane as it may sound this both calms, and procreates even more distress.

The ending is what all horror fiction writers dream of achieving. In my opinion it is the most gratifying ending to a horror novel I have come across. The story in itself can at times become so completely peculiar you find yourself wondering is everything random, or does it have a hidden meaning? Is this someone’s nightmare, or is it all in fact frightfully true? Is the subway some kind of twisted judge, jury and executioner?

The conclusion indulges the reader from the conventions that are generally incorporated into a horror fiction ending, as well as every question that ever popped into your mind whilst on this phenomenal journey being answered. Every action justified, and even the smallest presumably insignificant detail portraying huge importance.

An unforgettable read, and one that you will compare all future novels too. Pick it up right here and see for yourself!