HNR’s newest contributor, William Massa weighs in with his 10 favorite horror novels. Dig on the list below, you may see a few titles that surprise you!

Watchers – Dean Koontz – You love your dog. Now imagine he could beat you at Scrabble.  Man’s best friend has taking a leap to the next evolutionary level – thanks to some good old genetic tampering. Now throw in a heartfelt romance, a burned-out widower who teams with a wounded beauty and you have the story of a boy and his dog and the bloodthirsty genetic monster that is trying to join their game of fetch. A Koontz masterpiece!

Books of Blood – Clive Barker – Barker exploded onto the scene in the 80s and for a kid of that decade it was the literary equivalent of switching off a TV rerun of a Hammer horror flick and popping in that first VHS of Evil Dead. The violence and sexuality was pushed further than it had ever been before, but Barker did with such poetic, beautiful prose and economic storytelling, that shock was tempered with awe.  There is a dark majesty to these tales that crackle with a feverish imagination that is finally being unleashed upon the world. Barker has never been better!

The Wolf’s Hour – Robert McCammon – McCammon’s perfectly calibrated prose channels action scenes with precision, power and an intensity that leaps off the pages and straight into the projector of your mind’s eye. Imagine Raider of the Lost Ark meets James Bond, where a secret agent has to infiltrate Nazi Germany and prevent Hitler from using a secret weapon against the allies. What can one man do against the forces of darkness? Turns out a lot – especially if this man also happens to be a werewolf with a penchant for turning Nazis into filet mignon (served bloody please). If there is a point where action-adventure and horror meet, this must be it. 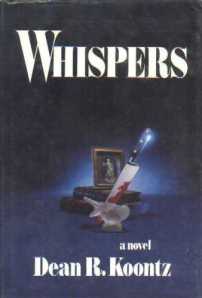 Whispers – Dean Koontz – Whispers was one of the first novels where my interests as a teen started to shift. Freddy and Jason suddenly seemed like he disgruntled runners-up of a Cosplay contest compared to Whisper’s chilling serial killer villain sprung from the dark corners of the real world.  It opened my eyes to the fact that crime fiction could be as horrifying as traditional horror, if not more so (the movie Se7en sealed the deal).  The book features one of the best twists ever and turned me into a lifelong Koontz fanatic.

John Sinclair – Jason Dark – Who the hell is John Sinclair? The biggest British badass since James Bond, that’s who. Sinclair moonlights as an Inspector working for Scotland Yard and fights the forces of darkness armed with a blessed cross, a magic boomerang, a Beretta full of silver bullets and the blondest hair seen outside of a Teutonic country since Steve Rogers. Released on a weekly basis in Germany for the last thirty-five years, John Sinclair has starred in over 1800 novella-length horror-detective adventures written by Jason Dark aka Helmut Rellergerd, a busy-bee writer who makes the rest of us scribes feel like slackers.  Sinclair battles such well-adjusted folks as Satan, Dr. Dead, Asmodina, the Spook, the Great Old Ones and pretty much any monster that has ever grazed the cover of a dvd. The writing is better than one would expect and the stories unfold at a feverish pulp pace while many of the covers still pop.  Here is a link to a rare translation of Mr. Sinclair’s first adventure, and the covers can be viewed right here.

Silence of the Lambs – Thomas Harris – What can be said that hasn’t been said before? Before cannibalism became a weekly gag on a TV show, there was this novel. And what a book it is. The movie is fantastic but the novel works its own precise magic with laser sharp prose and super-tight plotting.  This was the type of beach read that kept folks from actually hitting the beach.

Interview with the Vampire/The Vampire Lestat – Anne Rice – Before vampires started to sparkle and wear skinny jeans, there was Anne Rice. What people may forget is that the two first volumes in the series, ‘Interview with the Vampire ‘ and the follow-up ‘The Vampire Lestat,’ took vampires and their mythology to an electrifying new place. Originating the idea of bloodsucker as tortured anti-hero and adding new layers of mythology to a classic monster, the novels had a long-ranging influence on how we perceive vampires and its ripple effects can still be felt today.

IT – Stephen King – The ’Lord of the Rings’ of horror, an epic that rivals and even surpasses “The Stand’ in my mind. Chronicling the battle of a group of childhood friends who battle a terrifying evil one summer in the fifties only to find themselves reunited twenty years later to face their childhood nightmares all over again. The narrative is sprawling, mesmerizing and utterly terrifying, boasting characters that become your best friends. It encapsulated every King trope that came before and at the time felt like his magnum opus.

Der Hexer – Wolfgang Hohlbein – Think of Robert Craven aka the Hexer/the warlock as a cross between John Constantine and Dr. Strange who battles Lovecraft’s Great Old Ones and their representatives on Earth in the London of the 19th Century. This is another classic pulp series written by one of Germany’s bestselling fantasy authors. Unlike Sinclair, the Lovecraft connection and the fact that the story only spans 60 adventures, seems to practically demand a translation. The novella-length format is tailor-made for ebook readers (is anyone at Amazon listening – maybe I should start a petition?) 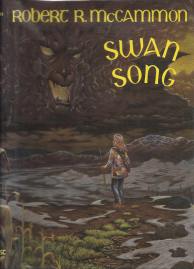 Swan Song – Robert McCammon – If your favorite epic horror novel is ‘The Stand,” it probably means you’ve never had the pleasure of getting lost in McCammon’s doorstep of a novel. Some might dismiss this as a knock-off, and it may just be an unfortunate case of parallel development. But the action here is fiercer, the emotional stakes bigger and Colonel Macklin and his “Shadow soldier” make Randall Flagg looks like an EMO-poser.   This is Road Warrior meets the genius of McCammon and features post-apocalyptic horror action at its finest.