Here’s a fun piece of flash fiction from Selena Wolff! 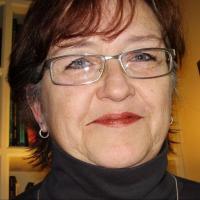 She had been warned, but now it was too late. Joss ran deep into the forest, her tears blinding her. She heard the old man panting close behind her; she arched her back to escape his filthy claws. From out of the gloom, low hanging branches slapped at her face, taunting her efforts to escape the man that called himself her father. She heard him stumble but she knew better than to trust that he was finished. His words echoed through the darkness. “I told you to shut up. Now it’s too late.”

The trees closed around her as she ran. Seeing an ancient oak that had fallen years ago, diving behind that fallen oak, she covered her mouth with her hands to quiet the sucking gasps that threatened to give away her position. The old man had always been dangerous, but her mother had protected her from the worst of his behavior. Her mother wasn’t here now. She wasn’t anywhere. As she cowered beneath the log, Joss remembered.

This morning Joss and her mom visited a friend that lived down the road. Arriving home they both noticed her father’s puke-green pickup in the drive and they grew quiet. Crashing sounds emanated from the house. Mom told Joss to go to the barn and wait for her.

Joss hid in the barn and waited until the small hours of the morning, but her mother never returned. Finally she crept out of the barn.  Just as she was edging toward the house, she heard her father’s gravelly voice.

“What have you done, you bastard?’” she wailed in fear. Through her tears she saw his reaction and knew that she must run. The forest trail was her only hope.

Now she carefully peered out from behind the old tree. A twig snapped and Joss turned her head, staring into the silver eyes of her father. His teeth were bared and as she backed away from him, he howled in triumph as the ground disappeared beneath her feet. Her screams echoed off the walls of the old well and when she landed on the bottom, both of her legs were broken. Beside her she saw the face of her mother, barely recognizable, eyes staring sightlessly.

The werewolf walked away from the hidden well in the forest, grinning at the sounds of the screams coming from within.

6 Comments on Read ‘The Well’ by Selena Wolff