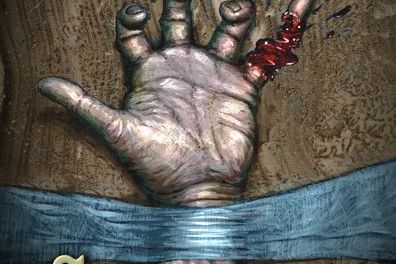 Well, I wanted something shocking…this was most certainly shocking.

A romantic getaway for Brad and Lisa turns into a kidnapping for Lisa to star in a Snuff film!

The setup of how she was captured in the first place is kind of shaky.  I don’t know of any place that throws someone in jail for 3 days for traffic violations on a “citizens’ arrest” but I guess it’s what moved the story to where it needed to be.

The characters involved in the making of the snuff film are all there for their own reasons.  Some for the pleasure of the rape and torture, some just because of the money involved in recording, and some just involved for the transport.  You get a bit of backstory on each of them, and they are vile disgusting human beings….every one of them.

The actions that follow, are bloody….vile….disgusting…they make you want to stop reading.  Bodies get mutilated during rape…eyeballs get eaten…and even an infant gets ripped apart.  There are very few lines that people can cross to push my limit.  This was one of the few.  I forced myself to continue even though every fiber of my being said to stop reading.  I continued on though, rather disgusted at myself for allowing the images to enter my mind.

The best part about this book in my opinion was the last 1/2 of the book….she does escape…and how she does it is kind of deplorable….but they try to get her again…and the whole setup of how things play out the second time around was much more exciting than the first half of the book.  The twist was even a bit bigger than I thought it was going to be.  I’m not sure if it made much sense, but it did stop and make me go “whoa”.

The conclusion is one that probably everyone may see coming based on the heroine’s story and actions, however it was still very sad for everyone involved.  The book ended just perfectly however.

It’s extreme horror, and not for everyone….and almost not for me. It kept me on the edge of my seat, even when I was mad at myself for continuing on.

About the author: Joe Hempel is the operator of www.topoftheheapreviews.com and contributor to http://www.horrornovelreviews.com.  You can find him on facebook and also twitter.