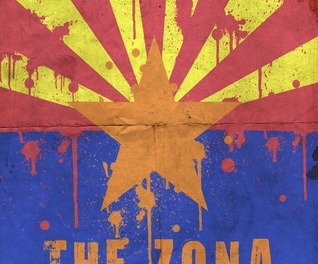 “We’re just winding down the clock until the Earth finishes us all off with weather and viruses or we finish ourselves with our own viciousness.” -‘The Zona.’

The post-apocalyptic theme in modern fiction appears to be enjoying a resurgence in popularity. Like many concepts prevalent in genre fiction this seems to be cyclical in nature, undergoing minor generational mutations in both literature and the visual mediums of comc-books, television and cinema. Kirkman’s ‘The Walking Dead’, Justin Cronin’s ‘The Passage’ (and its sequel, ‘The Twelve’) Cormac McCarthy’s ‘The Road’ are all solid examples of just how mainstream the appeal of this kind of fiction is. On the movie front the film version of ‘World War Z’ is currently doing good business at the box office with the trend set to continue next year year with the reboot of ‘Mad Max’ franchise. It’s an idea that’s attractive arguably because of the opportunities it presents for artists to ‘wipe the slate clean’, so to speak and create a world out of the ashes of whatever civilisation-decimating event they elect to depict, fashioning a scenario that invariably involves humanity’s survivors scrabbling together and forging a collective response to their new-found surroundings.

Nathan L Yocum takes a slightly different tack here by using the world’s weather as the causal agent of this particular apocalypse and it’s a fascinating and under-used idea. We’re told that this is an Act of God as Yocum notes, “…his rage brought the ocean and the plagues, so says the Church.” ‘The Zona’s’ weather-scoured narrative landscape is populated by pockets of dilapidated and diseased communities. The withered populations fear the onset of more floods, tornadoes and have managed to develop a theocracy whose collective brutality to its own citizens recalls the horrors of the Spanish Inquisition. Camps are set up to train young men to become ‘Preachers’, weaponized emissaries of the church who are sent out into the virus-infested townships to eliminate perceived threats to the church’s stability. Yocum’s protagonist is one such ‘Preacher’, a twenty-six year old character known as ‘Lead’ who we meet in rather dire, life-threatening circumstances in the book’s opening pages and follow his increasingly harrowing mission, meeting an assortment of thieves, mutated and irradiated marauders and a character named Eliphaz, who is the novel’s other seemingly unstoppable adversary, a veritable force of nature himself.

‘The Zona’ is a briskly written affair and has much to say about the nature of people who suffer from not only physical disintegration, but concurrent spiritual collapse as well. The church is a violent and merciless threat throughout the run of  Yocum’s narrative and there’s a section in the book where Yocum delineates an encampment known as ‘Purgatory’ that is home to some appallingly horrific tortures for those who have been deemed to have failed the Church. The characters Lead meets along his sojourn are engaging and interesting, if oft-times not as well-developed as they could be and Lead’s picaresque, terrifying path -chased as he is by the agents of the Church for the abandonment of his ‘angel of death’ type duties- through the novel is for the most part, appealing and engaging.

However, the heavy-handed religious nature of Yocum’s story becomes increasingly wearisome well before the page count reaches the half way mark here. There are references to biblical characters that are irritatingly transparent and come as across a the author lazily sermonising. From the Book of Job to Isiah Yocum piles on the comparisons to the various plights of the novel’s characters with the effect that this reviewer felt somewhat overwhelmed by the religious observations. Yocum never opens up the ideas he propounds for debate in a satisfactory way with the result that by the time the novel’s admittedly explosive climax has occurred you’re left with the lingering and not at all welcome sensation that you’ve just trudged your way through a 250 plus page Bible studies lecture.

The author’s prose style is attractively simple, his diction not at all convoluted and the landscape he describes is more Old West (Preachers carry weapons known as ‘Van Cleef’s’) than future sleek. The imagery is certainly influenced by Eastwood films, the Mad Max Trilogy along with a huge dollop of the Hughes’ brothers ‘The Book Of Eli’ in particular – sharing as it does similar themes. Yocum could do with proof-reading his narrative a little more rigorously as there are spelling mistakes peppered throughout the text and awkward sentence constructions as exemplified by the following, “a tower of light stood inexplicable” or  “light revealed outlines his hands had made in fear sweat”.

Though diverting, intermittently gripping, it’s unfortunate that the overall preachy tone of the book drowns out much of the drama here, ultimately smothering the tale’s conceit and what little literary charm it manages to generate.

You can give this one a shot right here.