Books of the Dead debuted the cover of Justin Robinson’s latest, Everyman, and it’s looking pretty damn gnarly. Keri Knutson (of Books of the dead Press) crafts this eerie little piece of imagery that proves well worthy of a long, lasting stare.

Everyman will land in the laps of fans before long. We’ll let you know as soon as this one is available for purchase. In the meantime, soak up the cover image below as well as a full synopsis of the novel. 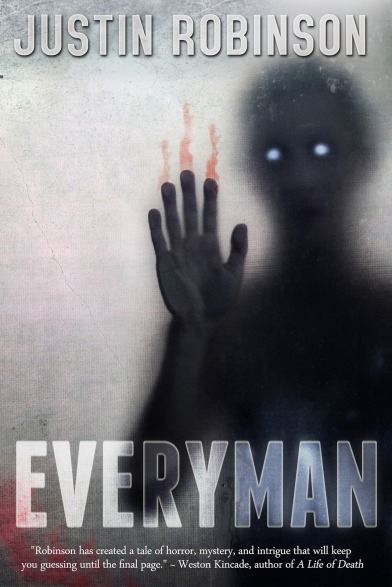 Synopsis: “Ian Covey is a doppelganger. A mimic. A shapeshifter. He can replace anyone he wants by becoming a perfect copy; taking the victim’s face, his home, his family. His life.  No longer a man, but a hungry void, Ian Covey is a monster.

David Tirado is a massive, hideous colony organism, a gestalt entity. The sum of Covey’s discarded parts. A roiling, chaotic patchwork of vast and varied personalities, memories, and physical forms that used to be a man − many men − David Tirado is a monster.

Sophie Tirado’s identity has been eroded by the tides of a long relationship, and now the man she gave herself up for has been stolen away and replaced by a mimic. Caught between the Doppelganger and the Gestalt Entity, she will try to save her husband, but there might be nothing left of him.

Virtue has a veil, vice a mask, and evil a thousand faces.”

1 Comment on Check out the Wicked Cover of Justin Robinson’s Latest, ‘Everyman’