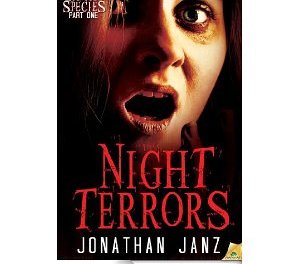 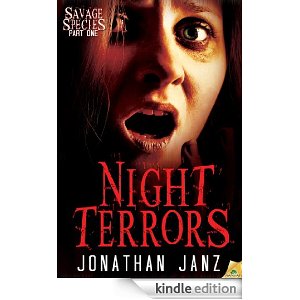 Night Terrors starts the Five Part serial entitled Savage Species by Jonathan Janz.  It’s the first time major publisher Samhain publishing has decided to do this.  The first installment is being offered for FREE to entice you to pre-order the others in the series which are scheduled to come out every two weeks at about $1.50 each.

The three characters of Jesse, Emma and Coleen are sent by their newspaper to report on the opening of a new park in the town of Peaceful Valley.  They are especially interested in getting an interview with Frank Red Elk, the lone Algonquin Indian holdout of the housing buyouts in order to build this park.

Eric and Charly Florence are a married couple that have a lot of problems.  Eric is a woman’s basketball coach who has beautiful assistant coaches, and Charly is a new mother who wants nothing more than to see her husband involved in her and her kids’ lives.

The story bounces back and forth within the chapters between these two sets of characters and how they handle their internal struggles before the creatures are introduced.  For Charly you get to experience her horror as she checks on her son and sees a nine foot tall….something…leap out of the window with her son cradled in its arms.

For the three reporters they come across a college group partying in the campground section and decided to join them upon invitation.  The meat of the story (no pun intended) is displayed here.  These creatures appear and brutally terrorize the group.

Jonathan Janz graphically describes how these creatures disembowel or rape or maim whatever they come across.  It’s not for the faint of heart.  In one scene he describes how the rape rips open a woman because of the size of the creature.

From almost start to finish the book is filled with taught suspense, graphic violence and horror.  Jonathan Janz really pulls  you into this world and with his graphic descriptions doesn’t really leave anything to the imagination.  I myself was even cringing at some scenes.

This installment wasn’t without some problems.  More than once I found some typos, and a biggie for me was the fact that when Jesse was talking with a minor character named Ruth, he called her Emma, then went back to using Ruth.  I have informed the author of this error through is website.

The Bottom Line:  I want more.  This is nothing more than a creature feature throwback, but it’s entertaining.  It doesn’t try to bring social issues into play, it doesn’t try to make it something it’s not.  It’s clear that this series is going to be about these creatures, and their gory bloody onslaught.

You are left with all sorts of questions that will slowly be answered through the series.  What happened to the boy?  How will the problems Eric and Charly have with each other effect the search?  Just what are these creatures and why didn’t anyone else know about them?

I can’t wait for them to be answered and look forward to reading the next installment in two weeks!

Get your copy of Savage Species Part One right here.

About the author: Check Joe out at Top of the Heap Reviews