Alexandra Sokoloff has been working to leave readers breathless for years now. The woman has released some high quality work and shows absolutely zero sign of slowing. Rather, if anything, Sokoloff has really hit her stride as of late. With some heavy industry nods already under her belt, and a growing fan base in tow, Sokoloff marches through the marshes of fiction delivering clean, straight forward stories that most genre fans are likely to gravitate to. She’s a damn fine writer (check out our coverage of Unseen here and Book of Shadows right here), plain and simple. She also happens to be one those rare good people as well. She’s warm, friendly and easy to talk to. Fortunately for us, she had the time to make a theoretical discussion a reality.

Our very own Drake Morgan managed to track Sokoloff down, and she was kind enough to isolate a few minutes of her day in order to tackle some questions. Check put the interview below, in which Alexandra discusses everything from misogyny, to screenwriting, to theater and more!

Drake Morgan: Let’s start with a bit of the obvious. Why writing? What inspired you to take up pen and paper? (Figurative these days of course).

Alexandra Sokoloff: It’s an interesting question because it WASN’T writing for me for a long time. I was much more into performance: acting and dance, which I did semi-professionally from the time I was 8 or 9 years old. But I very quickly became more interested in the big picture, the actual telling of the whole story. I suppose some of that was practical: a sense that I was/am a better writer than I am an actor.  But theater was the best training I could possibly have had for writing. Being up in front of a live audience tells you everything you need to know about what works in a story.

DM: Most of your novels are considered supernatural or paranormal. How do you draw the fine line between horror and supernatural? What do you think of the ever-increasing popularity of violent, brutal, torture horror?

DM: Women in the horror/supernatural genre often face an uphill climb against a largely male industry. What are your experiences with sexism or preconceived notions? 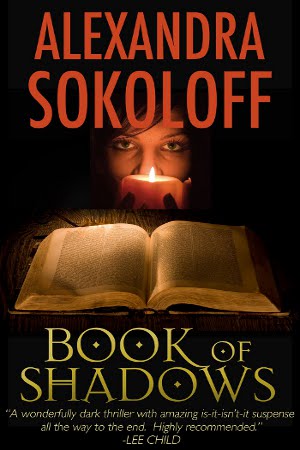 AS: I’m much more concerned with the overt misogyny I find in too many books and films by male horror writers/filmmakers. I am often asked to blurb books and I’ve found I have had to tell male writers up front: “I won’t read or review anything with rape scenes, unless you’re honestly exploring your own fear of male-on-male rape.”  Same goes for torture. I’m aware that there’s a bias in the industry against female horror authors but it doesn’t affect me in a practical sense because I’ve moved into writing and publishing very dark thrillers rather than overt horror. I love both genres, I went back and forth between the two, or crossed the two, as a screenwriter –  and I’m a full-time writer, so I’m not going to struggle against a genre that disparages women AND doesn’t pay as well as the thriller genre.  What possible sense would there be in that?

DM: How do novels differ from the screenwriting process? How does your screen writing experience impact your writing?

AS: There’s not that much that’s different, really. You create character and plot, dialogue and theme and suspense in pretty much the same way — it was the device of narration that was the brand new thing I had to learn: authorial voice. And you have more leeway to explore subplots and psychology. But I look at writing books as directing onto the page, and I think my books benefit from my screenwriting experience. The medium of screenwriting forces visual brilliance and metaphor, and a very clean, clear plot. Suspense is also a key component of film writing, no matter what genre. These are things that can easily get lost in the words of writing a novel. My readers obviously enjoy the filmic components of my books, so I’m glad that I can provide that for them.

DM: Does your theatre work shape your writing as a live, more intimate art form?

AS: Oh yes, constantly. I’m always aware of how a reader will EXPERIENCE my stories – I do whole drafts just focusing on the sensual and emotional experience I want the reader to have.

DM: Your works often deal with the theme of evil. Is it external or internal? Does humanity create evil from within or is it something outside of us? How do you define evil?

AS: That’s hard to miss, isn’t it?  It’s the main force that drives my writing, the exploration of evil. Honestly, I feel differently about it from day to day. Nothing is more horrifying to me than the evil that people do.  And I have to say, I mostly mean what MEN do: serial killing, rape, child molestation, torture, genocide, war crimes. These are largely male crimes – so why aren’t we dealing with them as such?

Kidnapping teenage girls and imprisoning them as sex slaves? That’s evil. That drive is obviously within the men who do it, but society creates a larger evil by allowing such crimes and arguably encouraging them, by not dealing with them full force. It’s really not just one person responsible for sex crimes, it’s also a whole industry (some strata of the porn industry, various media, etc.) that sells the idea of sex crimes as entertainment, and it’s also political systems that don’t identify sex crimes as the vast evil they are. So yes, it’s in us and a larger force outside us, too.

DM: If you could tell your audience one thing about your work, what would it be?

Be sure to swing by Alexandra’s website to keep up with her work. She’s insanely tenacious with terror and delivers the goods constantly!