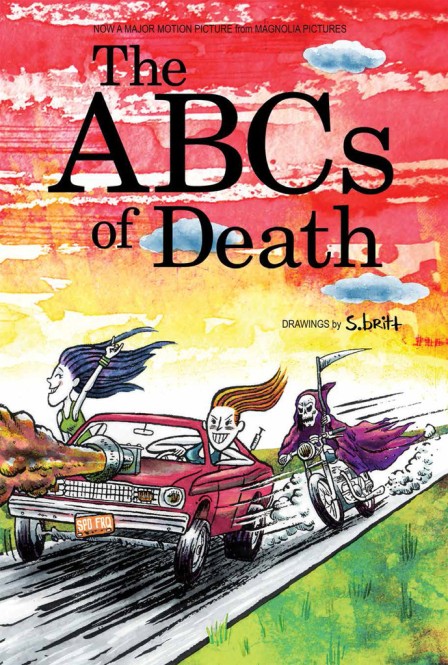 If you caught the crazy collection of short films, wrapped up and delivered in a package branded, The ABCs of Death, you may want to pay heed to this little piece of news. It looks as though book lovers are being offered a chance to get this collection in literary format. That’s right, a “grown-up children’s book” based on the flick is available for purchase. However, with a limited run of fewer than 700 copies tabbed, you’d better not waste much time in hesitating.

If you did indeed catch and enjoy the film, this is a fine opportunity to get your hands on the film in a fine package deal.

Check out the full rundown:

Producers Ant Timpson and Tim League announced today the release of “The ABCs of Death,” a grown-up children’s book based on their highly-successful anthology film of the same name. With a limited run of only 666 copies worldwide, the book also contains a special edition Blu-Ray of the uncut feature film, which includes a whopping 30 commentaries, behind-the-scenes clips, making-of featurettes, and trailers.

Featuring original artwork from acclaimed storybook illustrator Stephan Britt and accompanied by jaw-dropping verses from author Zack Carlson, “The ABCs of Death” is a 56-page storybook guaranteed to entertain young and old alike with its hilarious, heartwarming tales of cannibalism, suicide, and life-or-death sex tournaments.

Based on each and every horrifying segment from the hit 2012 anthology film (from 26 of the world’s most acclaimed voices in genre cinema), the disturbingly adorable storybook entrenches the movie’s extreme splatter into a whole new world of 1960s, Dr. Seuss-inspired artwork.

Following a hugely successful VOD release and limited theatrical run, the feature film The ABCs of Death was recently released on DVD and Blu-Ray from Magnet Releasing.

“The idea for this unusual film sprung from a deep fondness of alphabet books from our collective childhood,” says ABCs producer and creator Ant Timpson. “A little digging revealed that the books had a dark history, and that many early versions were used as punishment primers. In a sleep deprived state that was all the ammunition required for an epiphany of sorts. How about creating a film inspired by the alphabet?”

And now, it’s time for the book based on that film… based on those books.

You can pick up “The ABCs of Death” limited edition storybook (with Blu-Ray) at www.abcsdeathbook.com.

1 Comment on Learn ‘The ABCs of Death’… In Book Format!