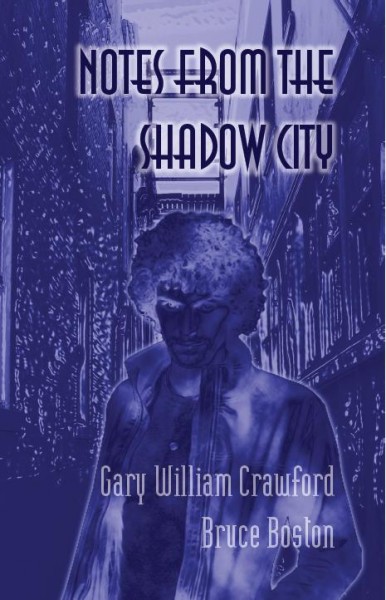 Modern poetry is a very challenging animal. In the post-modernist wake, form, style, and function have been tossed to the wind in favor of a less structured approach. At times this can feel a bit like anarchy as I wade through it. Modern genre poetry is even more difficult as it fuses the elements of genre onto this chaotic new world. When Notes from the Shadow City came across my desk, I paused. A poetry collection from two different poets telling a story… are you confused yet?

But as I read, the light of understanding went on. Granted, Crawford and Boston took on a daunting task. They had a story to tell. Shadow City is a place, both real and unreal. It’s a mysterious world of sinister monks, secret police, evil experiments, and dark souls. This could have been a novel, but the poetic form allows for a subtle exploration that captives the reader in a way a novel cannot. Poetry is about a single line or a single word used to convey a thousand thoughts. There is no narrative explanation or dialogue to define a character’s motivations. Crawford and Boston build a world on a tightrope of words and we believe. “Creatures of a hive mind” tell us more than a chapter of narrative about this dark place. It’s a place where “where songs are sung/ with the tuneless solidity/ of ancient cantos” and we hear those songs just beyond our own reality.

As a fan of the Gothic poets, modern poetry and I have not often found a comfortable place. Genre poetry has been even less satisfying as far too much of it falls into the descriptive rather than the imaginative. Notes from the Shadow City defies convention and sweeps the reader into its monstrous, haunting, lyrical bowels. A perfect addition to any adult, modern poetry library section.