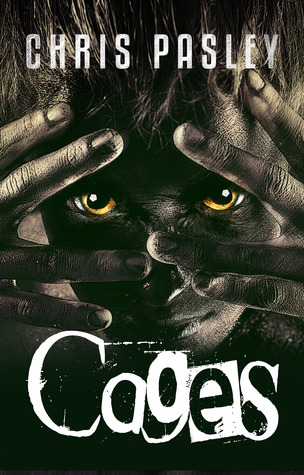 Videogame director, Chris Pasley delivers a new brand of terror with Cages, a tale of monstrous outbreaks and imprisoned teenagers. It’s an interesting concept that sports a wealth of promise, but sadly comes apart at the seams due to a completely botched editing job and a few significant story (perhaps I should say execution) hiccups.

Pasley’s tale essentially pits adults versus children, as the world’s teen populace is forced to enter quarantined facilities until they’ve reached manhood. The reason being is that teenagers seem to carry – exclusively – a certain parasite that can lead to sudden, unexpected physical transformations. One moment a defiant youth, engaged in a game of basketball, the next a deformed creature, wings sprouting, sharp, bone-like fragments protruding from their flesh, bodies stretching and elongating to sinister proportions. These things not only grow in size, but lose all sense of humanity, and attack anyone in their path. Those unfortunate enough to survive a bite, or attack, soon morph into zombies of a sort, labelled The Bitten, imminent death invading their immediate future.

Sounds like a cool concept right? Well, it is a cool concept. It’s Lord of the Flies meets The Shawshank Redemption with the added threat of hideous creatures, intent to do one thing: slaughter. There’s an enthralling story within these pages. However, there are some technical blunders that nearly negate every quality element the novel has to offer. The greatest, and most glaring issue with the story is the editing. If someone was actually paid to proof this and prep it for publication, they should take deep shame in their overt negligence, and return every penny paid out for their “services”. This novel may have more typos, grammatical fumbles and poorly structured sentences than any novel I’ve encountered to date. So much so in fact, that as a reader I often found myself more mystified by the lazy editing than the story itself.

And, as for the story, it doesn’t necessarily feel as though it received the nurturing it deserved. What it feels like, is Chris ran through his first draft, moved on to his second, fleshed some issues out, made some improvements, wrapped the second draft and declared it’s time to publish! But it wasn’t time to publish. There are questionable details in the story, and a few continuity issues that arise. It also sports one of the least rewarding climaxes I’ve ever encountered: for the most part no one wins, but rather than manifesting a sense of lingering dread (could we see a sequel??), it feels as though Chris simply grew tired of writing, or couldn’t quite decide how to bring Cages to rewarding conclusion.

Cages feels rushed, in every sense of the word. What bothers me most, to make such a declaration is the fact that I really, really enjoyed the concept at work. There’s a fine story to take in here. There honestly is. But the story simply isn’t entirely finished, and that’s flustering. Another draft, and a good, reliable editor could have elevated this project exponentially. Cages could have easily been a solid 3.5-4 star rating. As it is, unfinished and neglected, I’m forced to deliver a harsh score that I sincerely hope doesn’t hinder Pasley’s confidence. The man has the imagination to craft a superb story, but it’s going to take a lot more love and care if he hopes to reach his full potential.