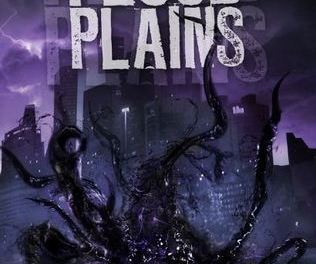 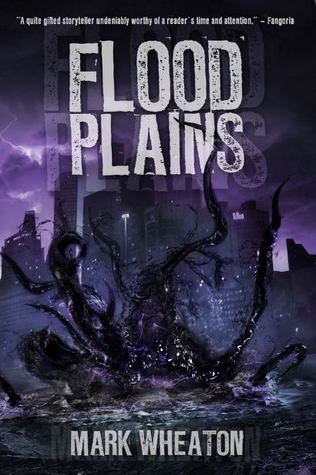 “As the hurricane got close and its powerful winds churned the ocean below, something began to stir under the ocean floor.”- ‘Flood Plains’.

Afficionados of the b-movie type monster on the loose scenario may well enjoy this latest effort from Mark Wheaton, a screenwriter of some repute. He’s stacked this horror tale with enough genre tropes to satisfy those hungry for a quick dose of dark fiction and movie-inspired disaster scenarios. Those looking for something more ambitious may be in for a disappointingly shallow reading experience.

Set in the present day Flood Plains is a familiar narrative that benefits from using multiple character perspectives to realize an indecorous tale that gradually takes on epic proportions. Primarily focused on a group of individuals who work for a computer hardware company named ‘Delltech Computers’ based in Houston, Texas, Wheaton neatly introduces his endearingly flawed and multi-cultural cast of characters. We have middle-aged ‘Big Time’, a well built individual who “attributed his physique to an inability to sit still for long”, the factory-floor’s primary focus of common-sense wisdom and a recently relocated family man with a past he appears happy to put behind him. Alan Terrell, a young father with ambitions beyond the assembly line, Muhammad Abdul Salaam, an educated man who resents all his years of degree-level study and subsequently only able to snag a job collating computer parts. Sineada, a seventy-one year old Medium who suspects that Alan’s eleven year old daughter, Mia, may have similar psychic ‘gifts’ as herself. Adding to the mix are a pair of elemental villains, the fast approaching category Five Hurricane Eliza and of course the voracious human-devouring monster itself, a vengeful entity that accompanies the furious force of nature, borne out of a horrific event unique to South Texas’ history.

There’s an obvious homage element informing the bulk of Wheaton’s text, one that owes much to the mid to late twentieth century’s cinematic and literary creative response to the cultural landscape at the time. It’s an obviously affectionate pastiche of hoary old horror cliches and taken as such it is significantly immune to serious criticism. The narrative ‘spirit’ -if you’ll pardon the pun- expressed here is one clearly enamoured of past iterations of this kind of monster-on-the-loose post -World War Two mythology.

Before the layers of horror are eventually heaped up to ridiculous levels Wheaton manages a few character driven flourishes that are disarmingly innovative; there’s a sub-plot early on involving one of the novel’s principle characters engaged in a moral dilemma that fleshes out the character in an interesting manner and allows the narrative a refreshing dynamism, but it’s relatively short-lived. There’s a dash of repugnant racism amongst the group that gives the author an opportunity to mix in a likeable undercurrent of dramatic tension and a core rationale established for the quixotic monster’s gory activities that makes for an intriguing raison d’etre.

Where the novel falls apart is in its overall execution. Wheaton’s flat and workmanlike descriptive abilities become increasingly apparent as the book winds its way to its fairly predictable conclusion. There are multiple instances of characters being assaulted, “with great force” or by “poltergeist effect”s that result in subsequent reader disconnect with the text. Lines like, “take your father’s hand, but look into his eyes. You’re going to go in there and calm his nerves” or “we don’t do this, the whole world dies” come across as clumsily constructed melodramatic epithets better suited to low budget, low concept screenplays.

Take elements of Stephen King’s nonsensical but terrifying short story ‘The Raft’, portions of the underrated horror movie ‘Deep Rising’, both filmed versions of ‘The Blob’, Carpenter’s ‘The Fog’ and agitate “with great force” you’ll have an idea of what you’re in for when you read Wheaton’s fairly adequate dark fantasy cocktail, ‘Flood Plains’. Evidently crafted for an undemanding horror audience not yet weary of stock concepts, Wheaton’s book is a diverting read on that level. For those perhaps seeking something more original and thought provoking it falls sadly short of the mark.