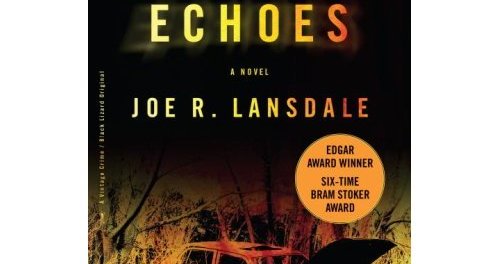 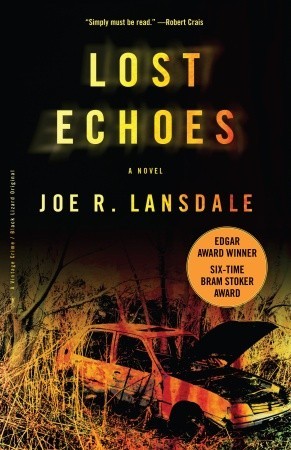 The great Texas writer, Joe R. Lansdale, is finally back with another mainstream novel, Lost Echoes, and boy is it a keeper!  It would also make one heck of a fabulous movie.  Some of Joe’s stuff has already been done by Hollywood: Bubba Ho-Tep, Incident On & Off a Mountain Road, The Bottoms is being made by Bill Paxton, and the Hap/Leonard series is under development for a TV Cable network.

Getting to Lost Echoes, this is about a young man named Harry Wilkes, who’s working his way through college and trying to stay out of trouble.  You see when Harry was six, he became sick with the mumps and developed a serious ear infection that affected a part of his brain.  After he got better, Harry soon discovered that if he were in an area where a violent crime had taken place and he heard a sudden sound, images of the past crime filled his mind and he would see the actual event happen, along with the faces of everyone involved.

In time, Harry realized he could hardly go anything without this mysterious ability being triggered.  When he tried to explain it his few close friends and to his parents, no one believed him except for Kayla, the first girl he ever loved.  As he grew older, Harry had to turn to alcohol as a way of dealing with these disturbing images that threatened his very sanity.

One night while in a bar with one of his childhood friends, Harry sees three guys escort an intoxicated man out the back door.  He instinctively knows the guys are going to beat up and rob the drunk.  He quickly to try and stop it.  Rushing out into the back alley, Harry witnesses something right out of a movie as the drunk takes on the three strangers in hand-to-hand combat and whips them in a matter of seconds.

The drunk turns out to be Tad Peters (think of Bruce Willis), a former martial artist who lost his family in a tragic accident.  Harry is curious about Tad’s skills as a fighter.  Recognizing a kindred spirit in the other, they swiftly become friends.  This eventually leads Harry into becoming Tad’s student as they each try to help the other with the inner demons and drinking problems.

It’s also about this time that Kayla comes back into Harry’s life.  Kayla’s now a cop, and she wants to find the people who murdered her father.  She seeks Harry’s help, which causes a whole chain of events to unfold.  Harry eventually finds out that the men who killed Kayla’s father are also connected to other unsolved murders.  It isn’t long before these dangerous figures find out about Harry and his special ability and decide to kill him and anyone else who might know their secret.

There’s going to be one hell of a free-for-all at the end when Harry, Kayla and Tad take on the vicious serial killers in a battle to the death with no mercy shown.

I remember staying up till one o’clock at night to finish Lost Echoes.  I’d reached a point to where I just couldn’t wait another day to find out the ending.  And it was worth it, too!  This novel is certainly Joe Lansdale at his best.  His writing is smooth and fast paced with an easy Texas colloquial style that makes it seem as if the author is speaking directly to you.  The chapters are short with an inevitable hook at the end of each one that makes you want to keep reading.  Also, the characters are richly drawn with their strengths and weaknesses displayed in such a way that you find your humanity touched.  Mr. Lansdale definitely knows how to set up the plot so that you’re reeled in like a struggling fish at the end of a hook.  And, more importantly, the author always delivers with a powerful ending that leaves you wanting to jump up and down with excitement like a monkey in a cage.

Lost Echoes is FUN with capital letters.  It creates a wonderful addiction that makes you want to read more of Joe Lansdale’s novels and short stories.  Man, this is what reading fiction is supposed to be–FUN!  You never feel cheated with a book by Joe R. Lansdale.  Never!  This is a writer who always gives his readers their money’s worth, plus more.  Buy Lost Echoes and treat yourself.  You won’t be disappointed.  I can only hope that Hollywood has the good sense to turn this book into a movie.