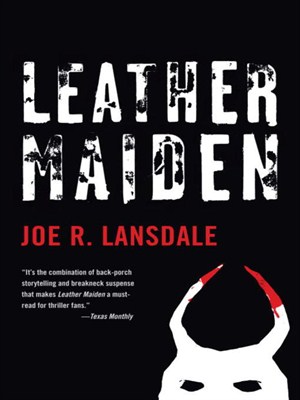 Ignore the title, Leather Maiden, isn’t what you think.  There are no sexy ladies dressed in black leather, playing the femme fatale role in Joe R. Lansdale’s novel.  While maybe not in the same league as The Bottoms, A Fine Dark Line, and Sunset and Sawdust, this is still a well-written suspense novel with plenty of Joe’s dark humor, great characters, hardcore action, and a strong sense of nostalgia that seems to occupy many of the author’s later books.

What Leather Maiden does deal with is a Pulitzer Prize-nominated journalist and Iraq war veteran, Cason Statler, who got fired from his newspaper job in Houston for having an affair with the boss’s wife and step-daughter.  Being jobless, Cason soon decides to move back home to Camp Rapture, which is located in East Texas.  He was to be closer to his parents and hopefully to fix things up with his old girlfriend.  Unfortunately for Cason, his old girlfriend doesn’t want to fix things up and threatens to issue a restraining order against him if he doesn’t leave her alone.

Cason’s new job at the local newspaper, however, sets in a motion a string of events that will place him on the trail of a team of serial killers, led by one of the most evil people the author has ever created, and to a final confrontation with the lives of two women that Cason has grown to care about hanging in the balance.  And, as good a fighter as Cason is, he won’t be able to do it alone.  He’s going to need the help of Booger, a sociopath and natural-born killer, who saved his life more than once when they served together in Iraq.  This is going to be Booger’s opportunity to pit his skills and training against someone who’s just as good as he is, if not more vicious and cunning.

What Joe R. Lansdale has written is a novel filled with pure Texas noir, plenty of mayhem, characters you love and hate, a strong sense of dark humor that eases the tension at various places in the story, unspeakable torture (victims being skinned alive), and a finale that makes you feel there is indeed justice in the universe.  Though many of the story’s characters may not be as well developed as others, the author still manages to bring each one to life with a few choice descriptions, especially Cason’s parents and the little girl that lives next door to them, playing Tarzan in his old tree house, Booger, who even scares Cason at times, Belinda and her braces, the Geek, who made the hairs on the back of my neck stand up, and the beautiful Caroline, who’s disappearance is the catalyst that begins Cason’s journey into the hellish abyss.

Leather Maiden is Joe working his special blend of mojo as only a great writer can.  The novel is excitingly fun and deeply entertaining, while at the same time offering a brief glimpse into one’s own memories of the past.

Most of Joe Lansdale’s novels during the past decade have touched something deep within me that causes me to yearn for that special place a person calls home.  This is great Texas writing at its best and is certainly a novel not to be missed by his old fans or new.