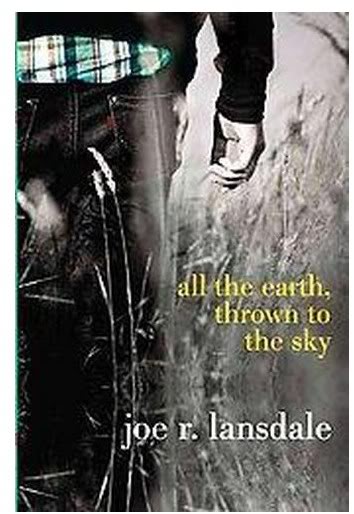 There are a lot of talented authors out there I enjoy reading.  In my opinion, however, there are only two great storytellers writing today.  They are Stephen King and Joe R. Lansdale.  The difference between being a great storyteller and a great author is that a storyteller can whip up a damn good yarn in any genre and hook the reader with just a few sentences.  It doesn’t matter if the genre is horror, suspense, westerns, thrillers, fantasy, or science fiction.  A great storyteller works in whatever genre that draws his attention at the moment and inevitably succeeds with his tale and the reader’s complete satisfaction.

Joe R. Lansdale, I hope you know.  If you don’t, shame on you because Joe wrote The Bottoms, which is probably the best novel I’ve ever read.  It made me laugh, cry, shout out in righteous anger, and in certain scenes it even scared the bejesus out of me.  Joe also wrote A Fine Dark Line, Sunset and Sawdust, Dead in the West, Cold in July, Freezer Burn  which is one of the most bizarre; yet, entertaining novels I’ve read in the last decade), Lost Echoes, the short novel, Bubba Ho-Tep, and probably my most favorite series of all, Hap and Leonard.  I like Hap Collins and Leonard Pine so much that I sent their latest novel, Devil Red, to Bruce Willis’ production company, hoping Bruce still has some good sense left in that bald noggin of his to turn the book into a major motion picture with him and Samuel L. Jackson playing the lead roles.

Okay, so what does all of this have to do with his newest book, All the Earth, Thrown To the Sky, which was written primarily for the Young Adult market?  Well, Joe may have written this novel with teenagers in mind, but the book is such that adults will love it, too.

The story takes place during the Great Depression, beginning in Oklahoma and ending in East Texas.  The dust storms have devastated most of the states in the central part of our country, leaving families with no way to support themselves, millions of people out of work, no crops and little food, scores of individuals committing suicide with no hope for the future, while others turn to crime, especially robbing banks.

Jack Catcher is a young boy, whose mom just died of pneumonia and his father hung himself in the barn from the grief of her death.  Jack has no dreams for anything better, except maybe for the wild idea that California holds the possibility of a new beginning.  That idea gets sidetracked when he spots two kids trying to make their way in a sand storm, running out of strength with no idea of where they’re actually heading.  Jack saves them.  He also knows them from school–Jane and Tony Lewis.  It seems their mom ran off with a Bible salesman, and their dad was crushed underneath a fallen tractor.

After getting some rest and some food in their stomachs, all three decide to head out to parts unknown, using Old Man Turpin’s car because Jack knows how to drive.  Since Turpin is already dead, he won’t miss the vehicle.  The kids are hoping the car will get them far enough from the state of Oklahoma so they can finally breathe some fresh air again.  Their journey, however, takes a turn for the worse when their car blows a tire and a bunch of bank robbers come driving by, in need of a new vehicle to help them avoid the law.

The criminals, Bad Tiger Malone and his two partners, crazy-ass Timmy and bullet-wounded Buddy, are the mean and deadly kind who’d rather shoot first and talk later.  The two main robbers decide to leave poor Buddy behind with a bullet in his head, thus ending his misery.  Bad Tiger also sees some good use for the kids.  He can hold them as hostages should the law find them.  During their life-experiencing ordeal, the three kids learn that Bad Tiger and Timmy are after another partner–Strangler Nugowski–who stole $50,000 from them to give his own child a much needed operation.  The two criminals could care less about the sick kid, but they do care about the money and getting their revenge on the former carnival wrestler.

When the right moment finally comes along (a storm filled with millions of grasshoppers), Jack and Jane and Tony escape from the bad guys and continue on with their journey.  The thing is Jane now thinks that the ex-bank robber should be warned about his no-good ex-friends and what they are planning to do.  Jane is young, pretty, smart, and a real blabber mouth, not to mention an outright liar.  She can talk up a storm, lie with the best of them, and get her brother and Jack to do just about anything she wants.  Jack knows the dangers of continuing on into Texas, but it’s what Jane wants.  Truth be told, Jack is already in love with her and she knows it as only a woman (or young girl) can.  Of course, in all fairness, Jane is free spirited and loves adventure, while Jack likes to play it safe.

All the Earth, Thrown To the Sky is storytelling at its absolute best.  Joe R. Lansdale has a distinctive style of writing that clearly resonates with his many fans.  He has the ability to make you laugh with his stories, while keeping you glued to the seat in anticipation.  Like Stephen King, Joe is able to get to the heart of his characters (whether children or adults) with a few choice words or sentences that bring enable his readers to see them as real-life people.  He does this with Jack and Jane and little Tony, as well as the other characters in the novel.  He touches upon the kid’s innocence and lack of understanding about the real world.  This is especially evident in the character of Jane, who lives in her own world of fairytales, fantasy, and adventure, believing that everything will turn out the way she expects.  Jack, being more down-to-earth, knows better.  He sees each new experience as a possible threat to their lives, until proven otherwise.  Little Tony, however, seems to go with the flow, trusting his sister to get them out of the tough spots.

I don’t know much about The Great Depression and the dust bowls that destroyed most of Nebraska, Oklahoma, and Northern Texas.  Joe seems to be full of history in his depiction of the era, and everything rings true to the ear as he describes the different kinds of dust storms that would swept down into each state with the storms sometimes being a mile high and hundreds of miles long.  You couldn’t see or breathe inside of them, and there was dust everywhere imaginable.

The criminals of the period bring a stark realism to the story with either their outward meanness or inner fairness with those around them.  Bad Tiger Malone was definitely the opposite of Pretty Boy Floyd, who seemed to be a person who’d been caught up in circumstances beyond his control.

As a reader, I can honestly say that you know deep inside when a story has done its job by the way you feel at the end.  All the Earth, Thrown To the Sky tugged strongly at my heart strings with the last few pages, creating a sense of emptiness and profound loss and missed opportunity that the lead character passed on to me.  I could identify with the kids in the story and understand where each of them was coming from.  Though I admired Jane’s strength, perseverance, and willingness to charge ahead, I still felt sadden by Jack’s loss.  Not many books hit me this hard at the end.

Needless to say, All the Earth, Thrown To the Sky is a winner in my opinion, cementing Joe R. Lansdale’s status as one of the best storytellers of our time.

Order All the Earth, Thrown to the Sky here!