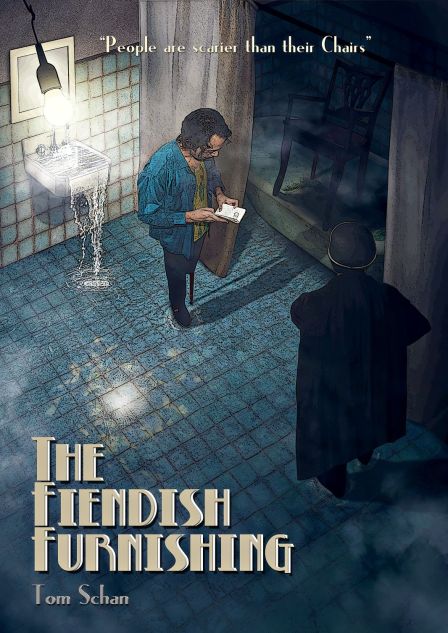 “You cannot win a standoff with an inanimate object.”

It’s difficult to counter Tom Schan’s opening salvo in ‘The Fiendish Furnishing’ with any real degree of criticism, since it’s a dedication where he states that without certain people being in his life, “none of this vile crap would have been written.” It’s an endearingly self-effacing start that allows the reader to sit back before plunging on with the book to wonder, Well, just how ‘vile’ is this “crap”?

“Some say the City of Helmstone guards the edge of the earth; that across the sea was Hades, and if paid enough, Charon the ferryman offered refuge to the damned. It figured. This city was a dump and the storm that had visited that evening must have been in agreement for it appeared hell-bent on cleansing the streets of their squalor.”

Establishing the locale with an economically descriptive verve Schan then sets about delineating the primary characters in his tale: Terence, “a thin, weasel-faced twenty eight year old man” and Jessie Muldoon, his attractive young girlfriend of whom Terence comments early on, “the girl reminded me of my mother. She didn’t like me very much either.” The pair both reside in an eighth floor apartment -the primary location for much of the novella’s brisk run – of such paltry décor Terence laments visitors to it “could have been forgiven for mistaking our flat for the home of a recently deceased geriatric.” Jessie, it turns out is a manipulative and explosively violent character while Terence comes across as something of an emotional doormat for his partner.

This is the part in the review where the reviewer figuratively takes a deep breath and attempts to further outline the decidedly odd nature of Schan’s narrative. Terence runs a museum, current down on its fortunes who acquires a chair that he thinks might revive the museum’s prospects. A chair with a disturbingly sinister history. Jessie is a surgeon who frequently arrives home covered in the blood of patients she’s operated on…and, oh yes, the chair is haunted. This is a vengeful piece of furniture that has much in common with King’s ‘Christine’ in that it’s an inanimate object with a creepy and deviously creative manner of dispatching it’s victims.

I might be doing the writer a disservice here by suggesting that this is not a horror novel as might be expected by the genre-hungry audience, more a blackly comic and wildly inventive farcical tale with unsettling imagery and an extremely uncomfortable story element that becomes more pronounced as the tale winds up to its violent climax. Also, it’s arguable that Schan’s narrative would benefit greatly from a more adroit editor as there are a few misjudged set-pieces that are clumsily arranged and there are unfortunate typo’s here and there. The use of the four separate narrators here to tell this bizarre story is often bewildering given that they all share similar use of diction and so it’s sometimes difficult to pin down who is observing what.

So, as a kind of summation, it’s this reviewers contention that if  ‘The Mighty Boosh’ were ever to sit down and write a ‘horror’ novel, it’s highly likely the end result would be something resembling Tom Schan’s ‘The Fiendish Furnishing’, a curious, sometimes hilarious, crude, though certainly engaging first effort.

I don’t think I’ve ever read anything quite like it. And you can take from that what you will.

Grab it here and give it a go, you can never fully trust James: we believe he suffers from split personality syndrome!