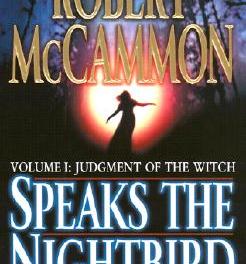 I’m not much into reading historical novels, but Speaks the Nightbird by Robert R. McCammon made me an instant fan of the Matthew Corbett character.  I then read The Queen of Bedlam, Mr. Slaughter, and The Providence Rider.  All four novels in the series are excellent.  Mr. McCammon is currently finishing up the fifth book and plans to write three before completing the series to his satisfaction.

Speaks the Nightbird is a novel that tackles the injustice of the witchcraft trials in Colonial America and how one young man dares to resist the mob mentality in order to save the woman he loves.  It begins in 1699 when Magistrate Isaac Woodward and his young clerk, Matthew Corbett, are called to the small town of Fount Royal, which is on the coast of the Carolinas, to investigate the accusations of witchcraft and murder against the beautiful Rachel Howarth.

Rachel has been accused of killing her own husband, Daniel, and the Reverend Grove, as well as having sexual intercourse with the Devil, and causing the slow demise of the community.  The town’s people are ready to lynch her, but Magistrate Woodward uses the power of his position to insist that a fair trial takes place before anything is done to the woman.

As the witnesses are called forth during the days ahead, each one describes in explicit detail how they saw Mrs. Howarth in the throes of passion with her supposedly dark Master.  Woodward firmly believes the witnesses are telling the truth, but young Matthew begins to suspect that there’s someone else behind the scenes…someone who’s pulling the strings of the local town’s people, intent of destroying Fount Royal and making Rachel the scapegoat to divert attention from his evil plans.

When Rachel is finally sentenced to burn at the stake, Matthew finds himself with only a few days to prove her innocence and to find out the identity of the real murderer.  This proves to be a worthy challenge and quickly turns a teenager into a young man as he catches a true glimpse at the evil behind humanity’s mask.

Speaks the Nightbird clearly surpasses any of Robert McCammon’s previous novels in sheer scope and craftsmanship.  In fact, I consider it to be his crowning achievement in the field of fiction.  Unlike his fiction in the horror genre, this is a historical novel of grand proportions that delves into the hardships of day-to-day living during Colonial times, along with the fears and superstitions that caused many people to behave in the most hideous manner toward their fellow brother.

Mr. McCammon takes us into this desolate world, creating a murder mystery of such complexity that the reader is kept on his toes in a futile effort to guess who the killer really is.  One can’t help but be delighted in the multitude of characters that come alive within this story, each with their own uniqueness, perversity, and hidden agenda.  It isn’t long before you realize that almost everyone living in the town has something to hide and a strong reason for wanting Rachel to be executed.

Of course, it’s Matthew Corbett who’s the real star of the story as he quickly makes the journey into manhood, trusting his own instincts for discovering the truth and refusing to give up when faced with the impossible, believing in the power of justice and love.  But, is he strong enough to take on the whole town and risk being burned at the stake along with Rachel?

Speaks the Nightbird is a true masterpiece of literary fiction that’s filled with nail-biting suspense and hard-hitting intrigue.  This is the kind of novel that’s sure to keep you up till the wee hours of the night, turning the pages in a hurried frenzy to find out what happens next.  HIGHLY RECOMMENDED!!!